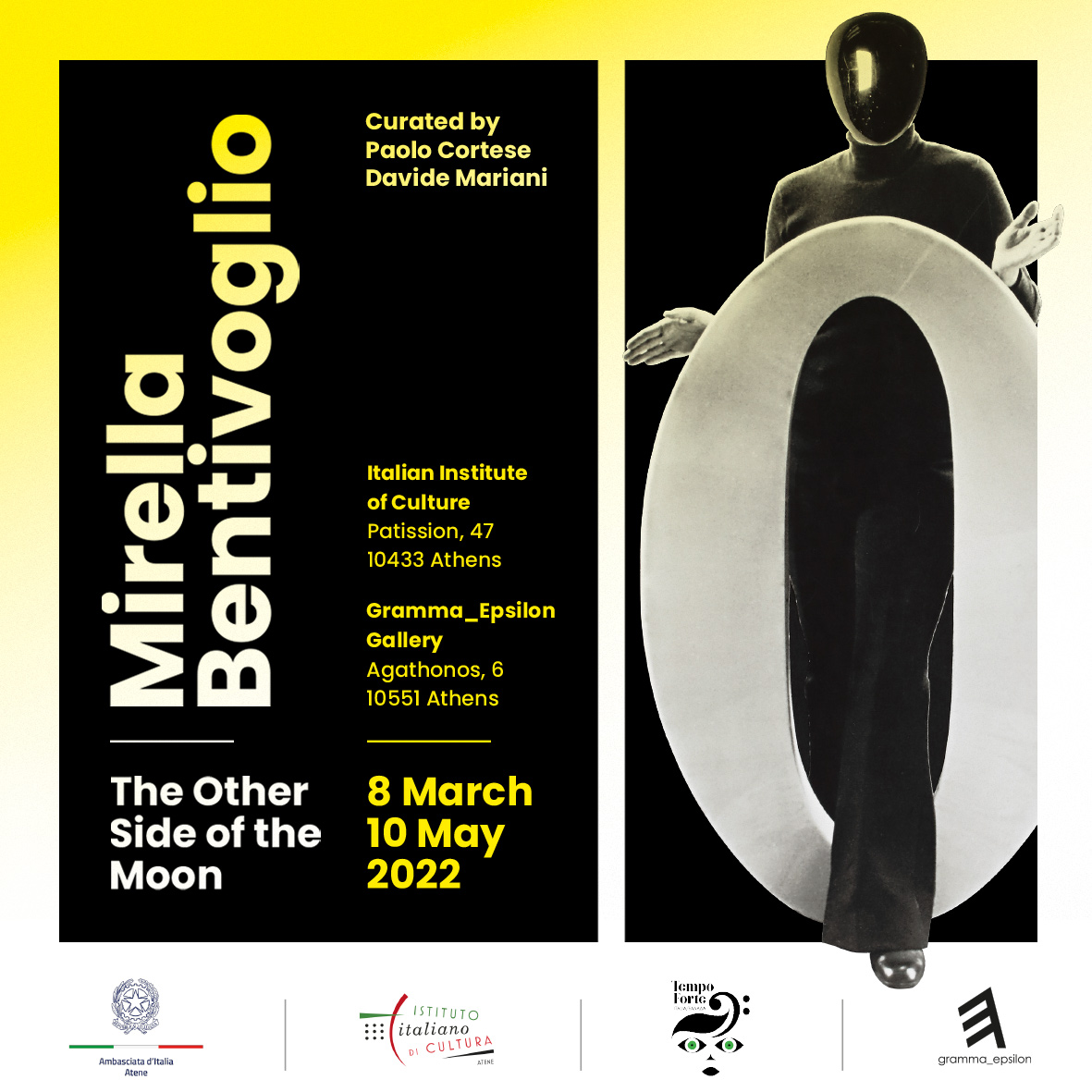 Knock (on your dreams) and they will open…

‘The Other Side of the Moon’, organized by the Italian Embassy of Athens, the Italian Cultural Institute in Athens and the Gramma_Epsilon Gallery, in collaboration with the Mirella Bentivoglio Archive, is the first retrospective dedicated to Mirella Bentivoglio in Greece and pays homage to the centenary of the influential Italian artist’s birth (Klagenfurt 1922 – Rome 2017).

Curated by Paolo Cortese and Davide Mariani, and on display at the Italian Cultural Institute and the Gramma_Epsilon Gallery, the exhibition highlights the depth and complexity of her poetry. The collection, which includes more than fifty works, including photos, videos and drawings, invites visitors to appreciate key moments in her artistic and curatorial career, and her thought-provoking ideas on subjects that are still very relevant today.

The exhibition traces the stages that marked Mirella Bentivoglio’s biographical and artistic journey, starting with her experimentations during the sixties and seventies, when she explored Concrete poetry, where meaning is transmitted through the shape and composition of letters and words, such as ‘Story of Monument’ (Storia del monumento), created with Annalisa Alloatti in 1968, ‘Cage (I have)’ (Gabbia HO,1966-70), ‘Success’ (Successo,1969). Her Visual poetry followed, characterized by the introduction of slogans and elements of pop culture, such as her renowned ‘I love you’ (Ti amo,1970).

In many of her works in those years she often investigated aspects of modern society, such as consumerism, which she openly and fervently criticized, such as in ‘The Consumed Consumer’ (Il consumatore consumato,1974) or ‘Heart of the Obedient Female Consumer’ (Il cuore della consumatrice ubbidiente,1975),and her witty interpretation of one of the most emblematic consumer logos for coca cola. “I noticed that by placing the two ‘C’s opposite each other to make a heart shape – and their shape alone made this possible (I did not have to change anything), the ‘oca’ (goose) appeared of its own accord”, affirmedBentivoglio in one of her last interviews in which she identified the ‘female-goose’ as a principal ally of consumerism.

Among the many issues explored by the artist, that of gender undoubtedly played a key role, as seen in many of her works on show, including: DIVA/NO (1971), ‘Tombstone to the Housewife’, (Lapide alla casalinga,1974) or ‘Cancelled’, (La cancellata,1977-98). In these works, Bentivoglio affirms that female emancipation is possible, but not a foregone conclusion, as she herself reminds us: “there was a habit of considering women aesthetically present only as housewives; female scientists were acknowledged, but not female artists”.

While the popular image of a woman was someone sewing and caring for the family, a kind of angel of the hearth, for Bentivoglio this concept needed to be reversed, by claiming a new role in society.

This is epitomized in the iconic writing on a T-shirt in ‘Correction, linguistic promotion of sewing’, (Correzione, promozione linguistica del cucito, 1988), which says: ‘do not/fear, I am a woman’ (niente/abbiate paura, sono una donna).