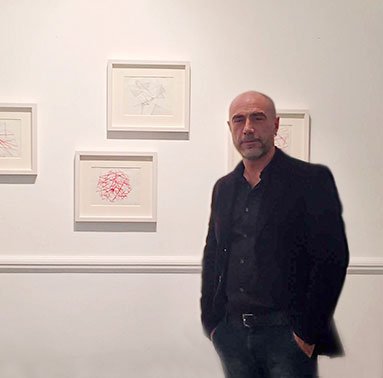 I was born in Rome in 1965 and since I was a child I have lived in close contact with art, in a house full of paintings by my great-grandfather Eduardo Cortese and his father Federico, Neapolitan painters of the Posillipo school. In the mid 80’s, while I was already working as a dubbing director, I started to cultivate a passion for antiques and shortly afterwards I opened, in the Monti district, a space dedicated to design and applied arts of the 1900s. There, in 1990, I organized my first exhibition entitled Amor di Ceramica. In those years, I had the opportunity to meet and relate to prominent personalities of the Roman artistic scene, such as Gaspero Del Corso, Claudio Bruni, Carmine Siniscalco, Lorenza Trucchi and Palma Bucarelli whom I interviewed in 1991.

Having met Enzo Mazzarella, owner of the Serpenti gallery, was fundamental for my training and my professional life. With him, but also with Martina De Luca and Rosanna Ruscio, we founded the “Idillio” cultural association in 1991, through which we organized important exhibitions such as that of the sculptor Marino Mazzacurati at the Accademia Nazionale of San Luca in Rome, at the Aragonese Castle of Ischia and at the Civic Museums of Reggio Emilia. Furthermore, in the early nineties, I edited with Isabella Sacco a publication (published by Gangemi) on the rationalist architect Giuseppe Capponi.

In 2001, another fundamental meeting gave a new direction to my life: the one with Massimo Lisanti, with whom I opened a gallery dedicated to art and design in the Coppedè district. In 2005, we organized an exhibition in our space dedicated to Cesarina Gualino, painter from Turin, wife of the industrialist and art patron Riccardo Gualino. It marked the beginning of a new exhibiting activity which, for over seven years, led us to organize dozens of exhibitions, mainly dedicated to female artists. The constant relationship with Topazia Alliata and Mirella Bentivoglio was crucial for managing to define the area of ​​interest of the gallery, thus becoming a reference point.

The activity of the Cortese & Lisanti gallery ended symbolically on 11th of September 2011, with an exhibition I curated, entitled Rotte Oltre del Vuoto. On that occasion, I invited the artists Francesco Cervelli, Annalisa Riva and Susanne Kessler to make a reflectionten years after the Twin Towers of World Trade Center’s attack.

In the following years I lived between Italy and Spain. Between 2012 and 2013 I collaborated with the Monserrato Arte 900 gallery of Enzo Mazzarella, for which I curated the Side Wall review, a cycle of six appointments with emerging artists, and an exhibition dedicated to two sculptors operating in Rome in the 70s: Rosanna Lancia and Nedda Guidi, to whom I was tied by a thirty-year friendship. In 2014, the entrepreneur and collector Ovidio Jacorossi involved me in a project at the Arion Montecitorio bookshop, where we set up the exhibition The Politics of the Signs and where I curated, with Giulia Tulino, a section dedicated to the book-object. In those years I spent long periods in Ibiza where the Terra project was born: a collection of handmade fabrics from Morocco, Burkina Faso, Ivory Coast, Congo and Senegal. African fabrics are forms of art, primordial forms of writing that I could “read” thanks to the lectures on the archetypal symbols of Mirella Bentivoglio. It was in Ibiza where I had the opportunity to curate some exhibition projects, including an exhibition on the American photographer Harold Miller Null and Kike Suay, Suggested Reality, set up in 2016 at the Davide Campi Gallery. In 2018, I curated, with Enzo Mazzarella and Rocco Marino at the Civic Museum of Foggia Frammenti di Puglia, another exhibition dedicated to Null.

Starting from 2019, thanks to a growing and widespread interest in those artists I had been working with for many years, I had stimulating collaborations with the art gallery Mancaspazio in Nuoro and Repetto Gallery in London, where I curated the exhibition Threading spaces. Again, for Repetto Gallery, in the latest editions of Miart, Artissima and Artefiera, I have curated some in-depth retrospectives that have aroused considerable interest in the press and the public. In particular, my project Three approaches to poetry dedicated to Mirella Bentivoglio, Amelia Etlinger and Elisabetta Gut at Artissima was defined as “a stand ruled by a delicate and poetic balance which for a moment manages to abstract the visitor from the chaos of the rest of the fair”.

Since 2019, I have been dealing with the archive and digital communication of the work of Mirella Bentivoglio and Franca Sonnino. In 2020 I also founded the Letter E association, a physical and virtual place where their respective skills can be shared in a transversal vision of a global, democratic and self-conscious art of a past that needs to be handed on.